The “Mæve,” the Interactive Board

The interactive installation Mæve provides visual and tangible access to the social and intellectual networks behind architectural projects. By the Interface Design team of the University of Applied Sciences Potsdam, this sure has futuristic written all over it.

The installation consists of an interactive surface and a large projection area. While users are interacting with the contents of the installation on the interactive surface, the network and the media files are displayed on the large projection. The ten winning projects from the Everyville student competition are represented as physical cards. If a card is placed on the interactive surface, a contextual space is opened around the project. Within this space, media files, related projects and keywords are visualized. When a second card is placed on the surface, the space turns into a network displaying similarities between the projects. In addition to the Everyville cards, the installation also contains inspirational projects from the MACE repositories. These projects are also represented by project cards and enable the visitors to connect the Everyville projects to MACE contents. Furthermore, as the interaction with the cards is not limited to the one person, entire groups and teams can explore the content together.

Check out some still shots after the break.

END_OF_DOCUMENT_TOKEN_TO_BE_REPLACED

I Want To Stop Time

This is a pretty cool design, seeing that it has practical use, as well as modern aesthetics. Personally, I would not mind having this as my clock/light switch for my room. Thoughts?

Be sure to check out additional photos of the Time Switch after the break.

END_OF_DOCUMENT_TOKEN_TO_BE_REPLACED

The Black And White Clock

Just look at what innovative things you can do with OLEDs, organic light emitting diodes. Designer Vadim Kibardin created this caseless clock, placing the four individual digits on a wall. A light sensor switches the numerals from black to white, displaying the correct time, day or night. Kibardin is currently searching for a manufacturer for his prototype, and I hope he finds one. 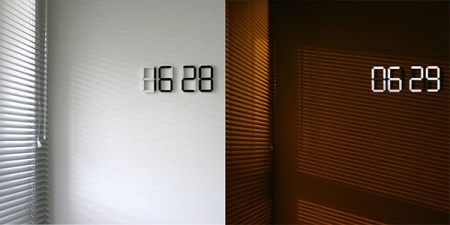 Designer Vadim Kibardin has my full attention with this OLED clock. The black and white clock, though just a concept, is one of the more innovative interior designs that I have seen in a long while, in terms of simplicity, creativity, and overal aesthetics. This clock is very impressive. Thoughts?

The Color Picker By Jinsu Park

Korean designer, Jinsu Park, designed a concept pen that adopts the eyedropper tool of Photoshop for real life experience. The color picker pen enables colors in the environment to be scanned and instantly used for drawing. The sensor detects the color and matches it to the color display and then the RGB cartridge located within the pen mixes the inks together to create the color that has been scanned. 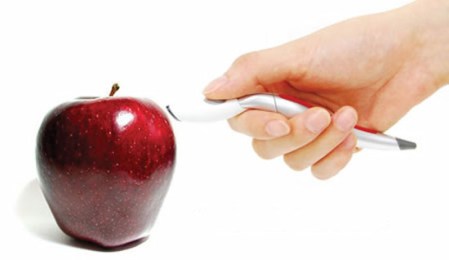 Though I am not much an artist in terms or drawing, what a very cool concept this Color Picker is. Honestly, if I were able to snatch this up on the market for a less than expensive price, I would. Kudos Jinsu Park, now just get this product out. Thoughts?

Check out more photos of the Color Picker concept by Jinsu Park after the break.

END_OF_DOCUMENT_TOKEN_TO_BE_REPLACED

Smartphone makers HTC introduce their third Android-based phone, entitled the HTC Hero. The touchscreen-infused device continues the momentum of Google’s Android operating system with a few added features, including: a 3.2-inch display, GPS, digital compass, 5-megapixel auto focus camera and expandable MicroSD memory. The HTC Hero will also have an anti-fingerprint coating on the screen for smudge resistance and a Teflon coating on the exterior. Aside from those small details, the Hero will also become the first Android phone to support Adobe Flash, integrating the upcoming Flash Player 10. Other features include Twitter feeds, weather data, email/calendar widgets and a universal search functionality that looks through emails, contact list and other information. The HTC Hero looks to make itself available in Europe this July and Asia later in the Summer. North American will see a release in the latter part of 2009, although price points have not be confirmed, nor providers. 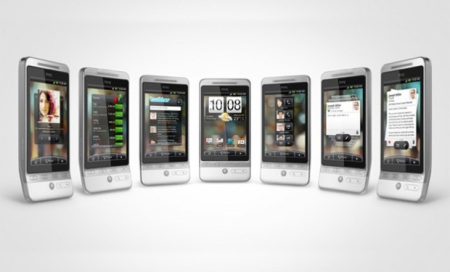 Seriously, the HTC Hero is absolutely bonkers to me. The features paired with the aesthetics paired with the sleek design make for a very nice phone, giving quite the competition to the prominent iPhone. If this comes out through Verizon, I will be snatching it up. Are you feeling this phone?

Also, be sure to check out more detailed photos of HTC’s Hero smartphone after the break.

END_OF_DOCUMENT_TOKEN_TO_BE_REPLACED

Sold in the 1980s by Impulse Ltd., this item combines two of my favorite things in life, robots and cameras, into one amazing product. The Voltron Star Shooter is an actual working camera that transforms into Voltron with just a few flicks of the wrist. While the SLR lens is fake, the camera does in fact shoot 110 film.

Well, this Voltron camera is just absolutely bonkers. When I ran across this, I decided that I had to preview it on this blog due to Transformers: Revenge of the Fallen coming out this upcoming week. I think this concept and design are very original in thought. What do you think?

Also, check out the trailer to Transformers: Revenge of the Fallen after the break.

END_OF_DOCUMENT_TOKEN_TO_BE_REPLACED

Apple officially unveiled their new iPhone 3GS today, at the company’s annual developers conference. Apple will debut in the new iPhone in stores on June 19th, making many Apple and AT&T users very pleased. The iPhone 3GS offers a variety of features iPhone enthusiasts have been craving for, including a faster processor that runs applications at twice the current speed, auto-focus 3MP camera, video feature, voice control, 9 hours of web surfing battery life, and digital compass amongst many other features. Available in two different colorways, black or white, the iPhone 3GS will come in a 16 GB version running for $199 and 32 GB version for $299.

I really do wish that Apple would extend their iPhone to Verizon users, but I do not forsee that happening any time soon. Though I love my Blackberry Curve, I would easily drop it in order to purchase the new iPhone 3GS. What do you think about the new iPhone? Overrated?

Check out more detailed photos of the new iPhone after the break.

END_OF_DOCUMENT_TOKEN_TO_BE_REPLACED

Wait, I had to take a second look to see that the lamp is not sitting on the table, but is instead being suspended by fishing wire from above and is being illuminated by the light directly below. Nonetheless, this concept is super duper dope and I would not mind having this in my room. In my opinion, the “illuminant lamp” is amazing.

The shade is made of reflective materials and suspended from the ceiling by fishing wire, the son suspended luminaries cut into strips 2 mm thick, which could be referring to tentacles of a jellyfish-are made from the same reflective material normally used for safety clothing. The bulb is placed in a cylinder on the ground and comes illuminate from below, giving life to this creature.

Check out more photos of the “Illuminant Lamp” after the jump.

END_OF_DOCUMENT_TOKEN_TO_BE_REPLACED

What is Samsung thinking with such a dope project? Going green? Amazing. I think that I want one..one day that is. 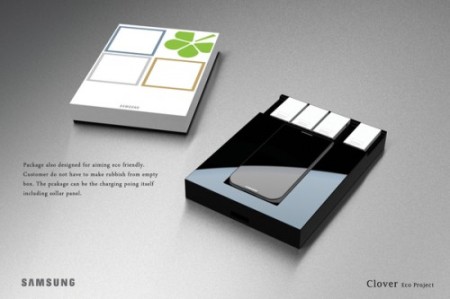 This conceptual “eco-sensitive” mobile phone is designed to be the only phone that you’ll ever need. Created with compartmentalized hardware, the phone is created with the ability to customize the phone to your ever changing needs.

It’s essentially an open-ware platform with a number of extension modules that can be added by users and developers. It reportedly has physical devices that can be added and removed to share environmental awareness in a collaborative social network called an “eco-map.”

Click below for more information from Samsung and more detailed photos of the phone and the hardware; it is pretty dope.

END_OF_DOCUMENT_TOKEN_TO_BE_REPLACED

So, you want to make a drum beat like Ye or Dre? Well, now you can.

Okay, this is a little random and a little weird, but I am posting on yet another flash drive, but this is insanely dope. I don’t know about you, but when I hear an amazing instrumental by Kanye West of Dr. Dre or any other great producer, I usually wish that I could also put out a beat of that caliber. Now, you can…well kinda, ha.

These are hair-raisingly, insanely awesome. Designed with the modern musician in mind, these two bad boys are convincingly modeled on the AKAI MPC2000XL sampler and the EMU SP1200 drum machine. By “convincingly modeled” I mean that they look strickingly similar to their original counterparts. These flash drives have a 4GB capacity and are going to run you $39.95 each, and you can pre-order them now.